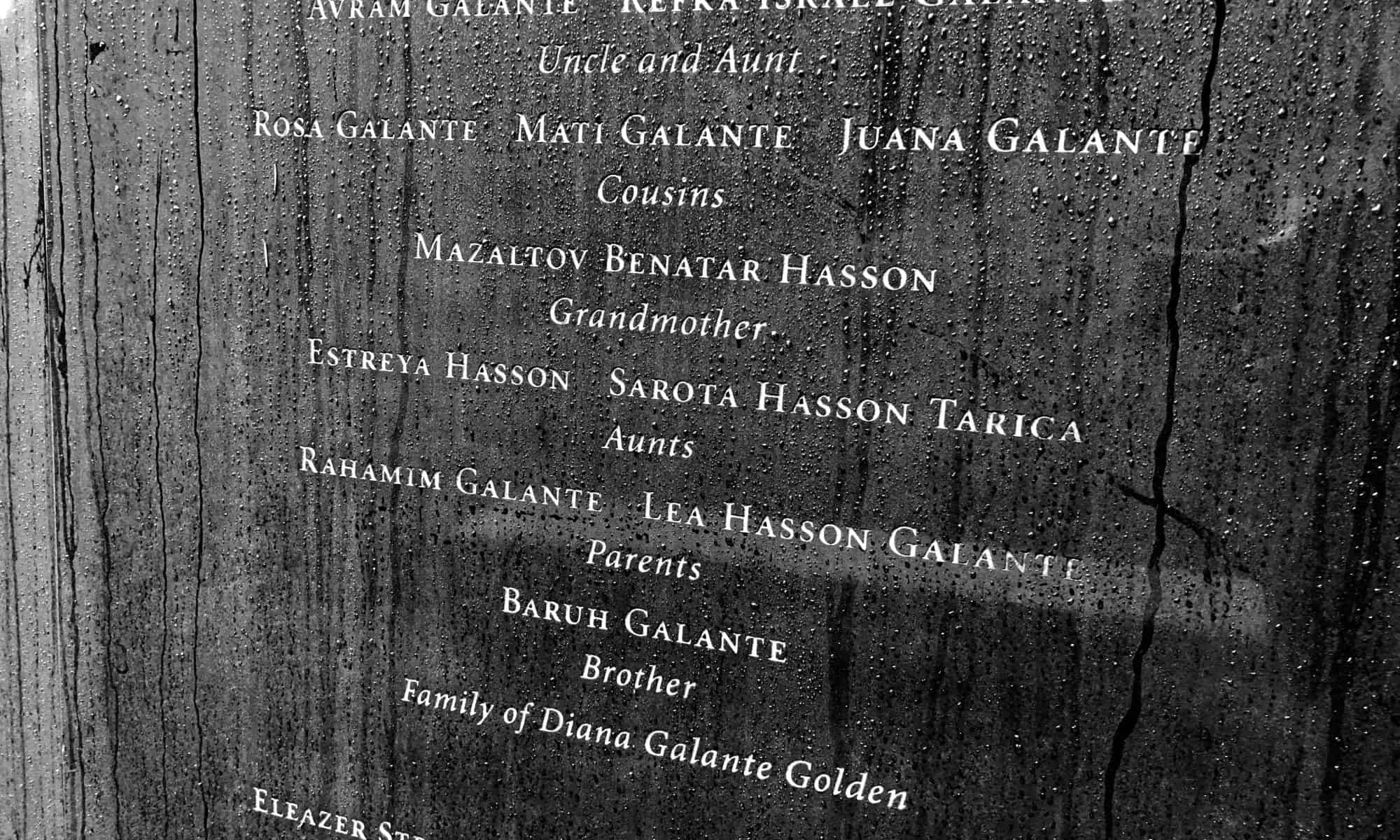 Diana Golden’s large Sephardic family included her father, a merchant who owned a dry goods store, her mother, two sisters, one brother, her grandmother, and an aunt, who was blind. They were part of a Sephardic Jewish community of about 10,000 living in one section of Rhodes. Diana’s older sister and brother lived in Morocco.

In June 1944, the Germans entered Rhodes and in July the Jews were rounded up and deported. Diana’s family was shipped first to a detention camp near Piraeus and then on trucks and in box cars to Auschwitz, where they arrived on August 16, 1944. Diana’s father died in the transport through Yugoslavia. In Auschwitz, Diana’s aunt, mother, and younger brother were separated from her and subsequently murdered.

Tap the grey bar and listen to Diana describe the loss of her father and grandmother enroute to Auschwitz.

Interviewer: Did you go straight to Auschwitz?

GOLDEN: No, it took a full month until we reached Auschwitz. We stayed about eight or nine days on the boat, and we reached Piraeus, which is the main port near Athens in Greece. We disembarked from there and walked for about three miles. They took us to a detention camp, and we stayed there for two days. Then we were brought back again, not to the port but to a railroad. We were put in cattle wagons, boxcars, and it was written there in French and in Italian that it could carry 40 horses, and we were in our boxcar 77. There were others with 100 persons inside. There was just a little window in that boxcar, and it was right in the heat of summer. So we were rounded up, and we had to walk very fast. They were hitting right and left indiscriminately and saying, “Quick! Quick!” and it was very, very hot at that time. It took us about 15 days, I believe, to arrive in Auschwitz. We went through Greece, Yugoslavia, Bulgaria, Hungary, Czechoslovakia, and we arrived at Auschwitz finally on August 16th.

Interviewer: And you had very cruel treatment during the whole trip?

GOLDEN: It was a horror. Many died. My father died. He was not together with me; he was in the next car. My grandmother died.We were all full of lice. We did not have water. During the day, the train would stop a couple of times. We were all sent out with big sticks, “Hurry, hurry, hurry,” and we had to do the personal means in the middle of the fields. Men, women, and children, like animals. Many people were sick. Many had dysentery because the water that they gave us came from a barrel. There was a barrel of water in each boxcar, and the barrel contained olives before. They were not washed properly, so the water was rancid. It tasted terrible and it smelled terrible, but that was the only water we had to drink. One man in each boxcar took care of distributing the water. As smelly and horrible as it was, we were very thirsty. We did not get any food. We had some food with us, a piece of bread, a piece of … but by the fifth day many people were dying already because they just didn’t have anything. As a matter of fact, before we went in the boxcar, they gave each of us a little piece of bread about the size of a hamburger bun, and that was all the food. Then, about four or five days later, they gave us again another little bun, and some raisins, and that was all. And we had a cup of water during the day; that was all we could have, that rancid water.